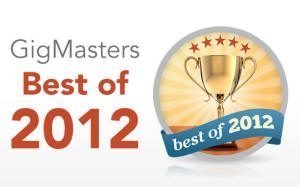 This award is given to the band who has the highest revenue through Gigmasters during the year.

The band won their 4th Gigmasters award in 2012 being selected “Best Of”. This award is given to entertainers with the most positive reviews by clients.

Award given to the highest earning and most popular event entertainers

“The Rising Star Award is GigMasters’ highest honor and our way of recognizing our finest party entertainers,” said GigMasters’ VP of Marketing, Marissa Latshaw. “It’s a real point of pride among our members and a testament to their hard work, talent, and professionalism.”

GigMasters is the number one event entertainment booking service, guiding party planners and hosts to the right entertainment for every event. By combining the efficiency of the web with the personal touch of a private event planner, GigMasters has helped facilitate more than 148,000 bookings. With the Internet’s largest nationwide database of client-rated performers for live music and variety entertainment, GigMasters boasts 10,000 performers including live bands, DJs, wedding musicians, celebrity impersonators, balloon twisters, stand-up comedians, jazz trios, bagpipers, string quartets, soloists and more. The site, founded in 1997 by Kevin Kinyon and Michael Caldwell, attracts over 25,000 daily visits* throughout North America.