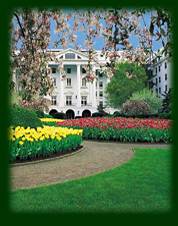 Liquid Blue performed at the world famous Greenbrier Resort on October 14th on a bill that featured former US presidents Bill Clinton and George Bush Sr. as guest speakers. The Greenbrier Resort was built in 1780 and has been named the number one Resort & Spa in the United States several times. Many US Presidents have frequented the resort, including Thomas Jefferson. During the cold war, bunkers were built to house the President & Congress in the event of an attack. This was made public just a few years ago. The resort sits on 6,500 acres in the scenic Allegheny Mountains in White Sulphur Springs, West Virginia.