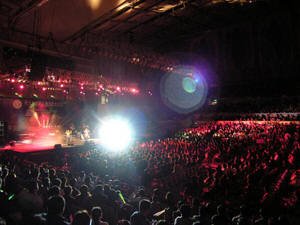 Liquid Blue was back in China in November, with sold out shows at the new Minghan Arena in Shanghai. The band did three shows in Shanghai, selling out the 5000 seat arena twice (no other acts on the billing) and packing Century Plaza for one outdoor show. The 1st show was filmed for Chinese television. Fans lined up for autographs afterwards with newly purchased copies of Supernova in hand.