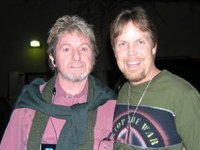 Scott Stephens met with long-time idol Jon Anderson in Los Angeles. Jon is the vocalist for the legendary band “YES” and one of Scott’s biggest influences. “Jon Anderson is one of the most uniquely talented singers in rock history. His positive lyrics have influenced an entire generation, including Liquid Blue” Quote: Scott Stephens. The two discussed the possibility of Jon singing on a future Liquid Blue track. Stay tuned.