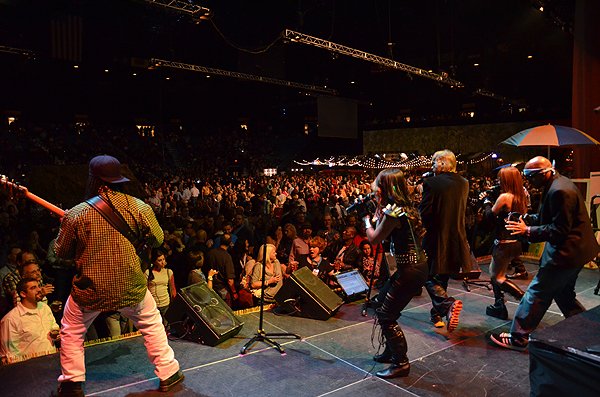 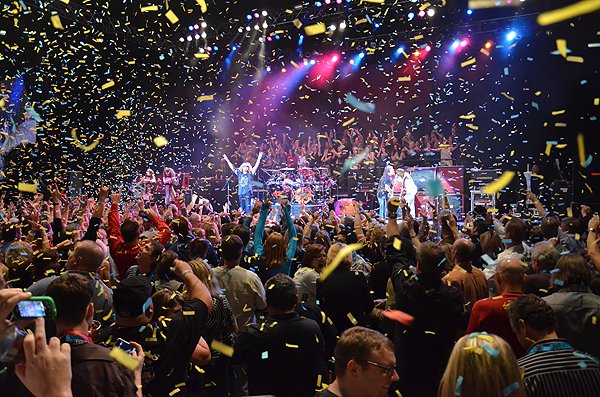 Liquid Blue opened a big show at the MGM Grand Garden Arena featuring Sammy Hagar and Styx on November 15th. This private event had attendance of about 6000. This arena has hosted the likes of Cher, The Eagles, Elton John, Barbara Streisand, The Rolling Stones and more. Lady Gaga performed here in March for her Monster Ball tour. Ironically, Liquid Blue founder Scott Stephens had interviewed both Styx and Sammy Hagar back in 1977 for his magazine, Raw Power. The interview with James Young of Styx occurred on the day Elvis Presley died. Now, 34 years later the parties met up again for this show at the MGM. Earlier this year, Liquid Blue performed at Sammy’s club, Cabo Wabo in Baja California. Sammy had former Van Halen member Michael Anthony on bass. For the show at the MGM, Liquid Blue opened for Styx and then performed in-between Styx and Sammy Hagar’s sets. Photo shown below was taken at the conclusion of Sammy’s set. View more pics of the show including the after party here.