Each year, the Better Business Bureau presents the Torch Awards to businesses and nonprofits that stand apart from the rest.

The Torch Award is the most prestigious award that the Better Business Bureau offers. It recognizes businesses with highly ethical practices. To qualify for a Torch Award, businesses must maintain integrity in their business. They must foster “trust among employees, customers, and communities.”

As one of the San Diego recipients, Liquid Blue has always put ethics first. From its founding in 1996, Liquid Blue sought ethics, integrity, and trust.  Since then, the group has grown from a bar band to a full-fledged concert cover band, specializing in elegant private events. Still, some things never change, including the band’s ethics. Liquid Blue has maintained its clients’ trust for nearly 26 years.

What Sets Liquid Blue Apart as a Party Band

Audiences love Liquid Blue for its uniqueness and energy, which is why the band has won numerous awards over the years. Liquid Blue covers many songs in a variety of styles. As the world’s “most traveled band,” Liquid Blue has garnered fans from all over the world. Today, the group provides services as a cover band and a wedding music band.

Liquid Blue is more than just a talented party band, though. The band is also proud to stand apart for its ethical practices.

Liquid Blue keeps a strong commitment to the environment. This group doesn’t just pay lip service to environmental causes, either. It takes action.

The band also maintains ethics in other areas, too. For example, Liquid Blue promotes positive change by performing at fundraisers and fostering respect for audiences, venues, employees, and band members.

Ethics in the Music Business

Liquid Blue knows that its ethical business model has a big impact. The group is honored that the BBB has also recognized this impact with the 2021 Torch Awards. This BBB Torch Award has inspired the group to reaffirm its commitment.

To learn more about Liquid Blue and its dedication to ethics, visit their home page or get in touch today. 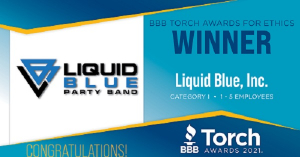 Liquid Blue Joins 1% for the Planet