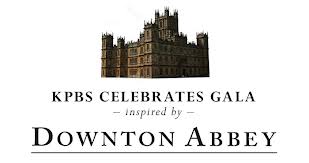 The KPBS Celebrates Gala Inspired by Downton Abbey takes place at the US Grant on Saturday, May 4, 2013. As you enter the Grand Lobby on 4th Avenue, white gloved butlers will greet you like a member of the British aristocracy. Attendees can look forward to a hosted reception and silent auction, seated dinner, Hall of Fame tribute, and a live auction. Live music and dancing follows the seated dinner featuring Liquid Blue. The Gala is inspired by Downton Abbey which has received critical acclaim from television critics and won numerous accolades, including a Golden Globe Award for Best Miniseries or Television Film and a Primetime Emmy Award for Outstanding Miniseries. It was recognized by Guinness World Records as the most critically acclaimed English-language television series of 2011. By the third series, it had become one of the most widely watched television shows in the world.
Tickets are $500 each or $5000 for table of 10. For tickets and information, please contact Claudine Casillas, Special Event Manager or call (619) 594-4266. For Liquid Blue, Saturday night is a “double-header” with a 6:30 show at the Hilton San Diego (with Acoustic Blue; see below) and they the KPBS gala at 9:30pm. KPBS serves the local communities with news and entertainment programming that respects the audience with inspiring, intelligent and enlightening content. KPBS delivers this content via multiple outlets, including television, radio, and digital media.