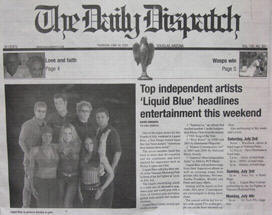 An estimated crowd of 5000 showed up to witness the Liquid Blue headline performance in Douglas, Arizona for their 100th Anniversary Festival. Other acts included Atrest, New Direction, El Paisano & Tony Tee. The event was held at Veterans Memorial Park in Douglas on July 3rd. The Douglas daily newspaper featured the band on the cover of the June 30th paper. While in Douglas the band stayed at the famous Gadsden Hotel, build in 1907, which has twice been featured on Unsolved Mysteries due to it’s reputation for being “haunted”.