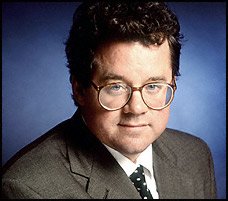 Michael Kelly, a cousin of Liquid Blue vocalist Scott Stephens, was killed April 2nd while reporting for the Washington Post in Iraq. He was imbedded with the Army’s 3rd Infantry and was the first American journalist killed in the war. Mr. Kelly was the editor for the Atlantic Monthly and a columnist for the Washington Post and NY Times. He authored a book on the first gulf was called “Martyrs’ Day.”