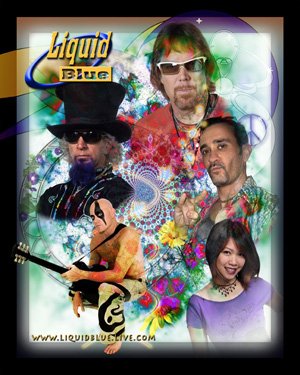 Liquid Blue was the headliner for the annual Beatles Forever Festival in the city of Logoisk, just outside the capital of Minsk on June 7th. Belarus is a communist country that has recently had rough relations with the United States but the festival is a coming together of people, not politicians. Bands from around the world attended and over 16,000 fans turned out. Liquid Blue performed an hour set of Beatles classics with emphasis on works that were originally recorded with Sitar. These include Norwegian Wood, Across The Universe and others. Songs by George Harrison (My Sweet Lord, What Is Life), John Lennon (Imagine) and Paul McCartney (Junior’s Farm) were included. Last year, Two From Blue, the acoustic duo of The Grovler and Scott Stephens, performed a show at the Beatles Cafe in Minsk. The owner was pleased enough that he invited the entire group back to perform at this years festival. Europe is the 5th continent the band has visited in 2008! View Festival Photos.